I travel on 'shrooms, and I’m not talkin' portobello. I’ve been drinking superfood mushroom beverages from the brand Four Sigmatic since 2016. Their products are part of my everyday routine and they’re especially helpful on the road.

Why? Because traveling is stressful. From long-haul flights and missed connections to sleeping in unfamiliar places, travel is taxing on both the body and mind.

I use a variety of products from Four Sigmatic on a daily basis, but there are two that I rely on when I travel, which are the Adaptogen Coffee and the Reishi Elixir. More on that below. First, let’s cover some basics.

(This post is not sponsored by Four Sigmatic. My opinions are my own and these products have been purchased with my own money. I’m simply an avid user!)

What Are Functional Mushrooms?

The fungi kingdom extends far beyond the white button mushrooms found in your grocery store. In fact, there are over 5.1 million species of mushrooms and fungi, ranging from deadly to downright delicious.

I prefer the functional variety, which are healing, adaptogenic superfoods that grow on trees and logs in the deepest parts of the forest. Depending on the specific mushroom, benefits range from physical to mental.

If you haven’t heard of Four Sigmatic, they specialize in functional mushrooms, superfoods, and adaptogens to help us live healthier, more enhanced lives.

They make drinking mushrooms delicious and easy-to-do with mushroom coffees, blends, and elixirs that can do anything from boost productivity to promote restful sleep.

Why Four Sigmatic is Great for Travel

I love traveling with Four Sigmatic products because their packaging is compact and convenient. Four Sigmatic extracts the superfood goodness out of functional mushrooms, turns it into a powder, and puts it in packets that fit perfectly in your backpack, purse, or pocket. No mess required.

My on-the-go mushroom routine is to drink two beverages per day. I drink the Adaptogen Coffee in the morning, and the Reishi Elixir at night. However, you could drink these anytime you need a boost or need to chill.

I’m a coffee addict, but the caffeinated jitters that I experience after drinking an almond milk latte (my favorite) doesn’t do any favors for my anxiety, which is already elevated en-route. Four Sigmatic’s Adaptogen Coffee helps you power up while keeping calm with organic arabica coffee blended with stress-reducing adaptogenic herbs.

I love having a “cup of coffee” in my pocket so I can avoid paying $5 for a drink at the airport Starbucks. Likewise, it’s a great option when quality coffee isn’t available.

I’ll never forget the coffee I bought in Belize City’s tiny terminal while waiting for our hopper flight to Dangriga. It was early in the morning, and we’d just finished an overnight red eye flight from Seattle to Atlanta, then flown from Atlanta to Belize City (whew). Needless to say, I was tired and needed a jolt. I ordered an americano from a little no-name espresso stand and it tasted so bad that I threw it away after only one sip.

Had I brought Four Sigmatic mushroom coffee with me, I could have saved a few dollars and spared my taste buds.

It can be difficult to get a good night’s sleep while traveling. Even if you’re accommodation is a 5-star resort, you’re still sleeping in an unfamiliar bed with unfamiliar sounds and smells. Drinking reishi in the evening helps to relax the body, calm the mind, and promote restful sleep.

I’ll take all the help I can get!

Whether I’m home or on the road, I drink a cup of reishi elixir mixed with hot water 1 hour before bedtime. I usually mix in some collagen protein, as well.

Reishi is also great for relieving stress during the day. Drink a cup whenever you’re feeling tense!

Hi there! I’m Brittney. I’m a travel-obsessed wellness junkie who believes in maintaining a healthy lifestyle on the go. I’m here to share good eats, unique stays, and active adventures to help you #TravelWell. 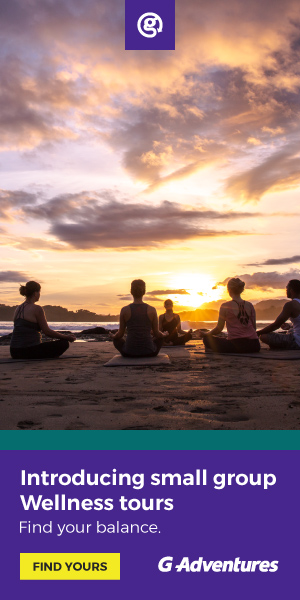